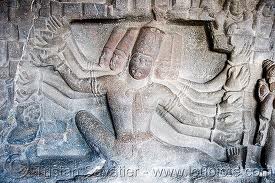 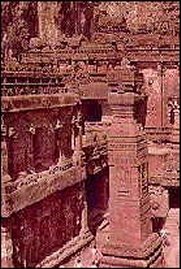 Ellora Caves
Ellora (\e-ˈlȯr-ə\, IAST: Vērūḷ) is one of the largest rock-cut monastery-temple caves complexes in the world, and a UNESCOWorld Heritage Site in Maharashtra, India. The site presents monuments and artwork of Buddhism, Hinduism and Jainism from the 600-1000 CE period.[1][2] Cave 16 of Ellora features the largest single monolithic rock excavation in the world, theKailasha temple, a chariot shaped monument dedicated to Shiva. The Kailasha temple excavation also presents the gods, goddesses and mythologies found in Vaishnavism, Shaktism and relief panels summarizing the two major Hindu Epics.[3][4][5]
The site features over 100 caves, of which 34 caves are open to public.[3] These were excavated out of the vertical basalt cliff in the Charanandri hills. These consist of 12 Buddhist (caves 1–12), 17 Hindu (caves 13–29) and 5 Jain (caves 30–34) caves.[6][7] Each group presents the respective deities and mythologies prevalent in 1st millennium CE, as well as the monasteries of that religion.[6] They were built in proximity and illustrate the religious harmony prevalent in ancient India.[2][8]All Ellora monuments were built during Hindu dynasties (funding was done by royals, traders and rich of that region), such as the Rashtrakuta dynasty who built some of the Hindu & Buddhist group of caves, and Yadav dynasty who built some of the Jain group of caves.[3][9]
Ellora was an important historic commercial center of the Deccan region, located on an ancient trade route of South Asia.[10]The caves served as monasteries for monks, temples for prayers and a place for pilgrims to rest,[7] but now is an archaeological site. It is 29 kilometres (18 miles) north-west to the city of Aurangabad, and about 300 kilometres (190 miles) east-northeast from Mumbai. Ellora Caves, along with the nearby Ajanta Caves, form one of the major tourist attractions inMarathwada region of Maharashtra. Ellora is a protected monument under the Archaeological Survey of India
When you call, don't forget to mention that you found this ad on oClicker.com